Today at Light Future Art, we’re going to share some fun facts about an American wolf species which went extinct in the wild but, thanks to conservation efforts, is successfully making a comeback: the red wolf!

1. Red wolves live in the Southeastern United States. The first appearance of them in the fossil record seems to be 10,000 years ago, in Florida. It is believed that after the extinction of the dire wolves, red wolves began to push coyotes out of the Southeast until recently.
2. If they have enough to eat, red wolves can easily adapt to any type of environment. They historically have lived in places as different as swamps, forests, farmland, and prairies.
3. Red wolves are closely related to Eastern wolves, but there is some debate about what the red wolf actually is. One theory puts forth that the red wolf is a recent cross-species between grey wolves and coyotes, and another theory posits that the red wolf is actually an ancient cross-species. Another still theorizes that the red wolf is another species entirely.

4. When having cubs, red wolves make dens along river banks and in hollow tree trunks. In late winter, they have an average of six or seven cubs. Both parents take responsibility for raising the cubs. They are ready to begin to fend for themselves beginning at six weeks of age but aren’t fully grown until they are two years old.
5. Prior to the red wolves’ re-release into the wild after near extinction, they didn’t hunt large prey and generally ate small mammals. The re-introduced red wolves have been hunting deer, though, which historical records suggest they may have done in the recent past, just a few hundred years ago.
6. Travelling at a speed of about five miles per hour, a red wolf typically travels over 20 miles every day looking for food. When running, they can reach 30 miles per hour, but only in bursts.

7. Red wolves are more social than coyotes but significantly less social than gray wolves. They tend to hunt alone or in very small groups. These small packs do exhibit some of the same pack hierarchy that gray wolves have but at a reduced level.
8. In the mid-1900s, part of what was causing the rapid disappearance of red wolves in the wild was their interbreeding with coyotes. While the offspring between red wolves and coyotes are viable and healthy, they are not pure red wolves. This was happening because so many red wolves were unable to find mates within their own species. Red wolves mate for life and if there aren’t any available single wolves in the area, they would pair with coyotes.
9. Red wolves are not violent or predatory towards humans. There have been no recorded incidents of red wolves ever attacking a human. However, the Cherokee people do not kill red wolves for the belief that the pack of the slain wolf will find the killer and exact revenge. 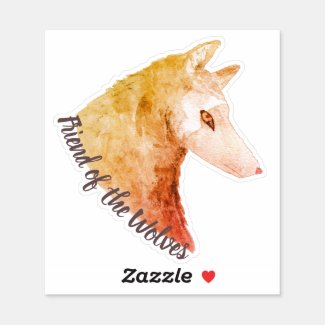 Sticker and other wolf products available in my Zazzle store