Earlier this week, we discussed information about moose living in North America. You can go here to check it out. Today, we are going to be diving into some evolutionary history of the species Alces alces.

You may know that today, moose live in Northern North America, but that wasn’t the case for their ancestors. Fossil records show that the predecessors of moose actually originate in Siberia but then gradually moved West across Europe to find warmer climates. Although called by a different name, the Irish elk (Cervus megaceros) is the most abundant in the fossil record (Europeans call mosse “elk”, coming from a Greek word). While seeming to have the same skeletal structure of modern-day moose and the same division between males and females (males with antlers, females without), the antlers on Irish elk were gigantic.

You can see in the photo that “gigantic” is not an exaggeration. They could reach up to 10 feet across and weigh 100 pounds. The Irish elk went extinct around 10,000 BC, and it is entirely possible that they would have coexisted with human ancestors, though not Homo sapiens. Irish elk fossils have been analyzed and found with what look like wounds from arrows, hinting that they might have been hunted, which isn’t a wild conjecture. This may have even contributed to their eventual extinction. We can compare them to the Woolly Mammoth Just as the warming climate alone didn’t kill Woolly Mammoth, it undoubtedly must have been getting too hot for such a large animal and then hunting dealt a fatal blow.

Less is known about another ancestor of the moose which went extinct around the same time as the Irish Elk: the Stag-Moose (Cervalces scotti). This animal lived in North America and, from all appearances in the fossil record, would have looked like a cross between a moose and an elk. They were larger than modern-day moose but smaller than the Irish elk. It is believed that the Stag-Moose led a very similar lifestyle to moose today, preferring swampy, wet areas to live in, and eating the same types of vegetation.

Alces alces have been in North America for about 10 million years, although not in the form we might be able to find today. They were smaller than the Irish Elk but no less impressive.  They flourished as larger counterparts alongside the Stag-Moose until 5 million years ago. At this time, the fossil record shows that there was an increase in wolf populations, and the species split into a larger and smaller version of itself. Alces alces antlus was the larger of the two, with wide antlers and heavy fur. They also had sharper teeth than other moose species. Alces alces smallus has smaller antlers and a smaller body. Because of its size, Alces alces smallus existed for only 1.5 million years. Alces alces antlus had a great advantage because their antlers were intimidating and their teeth opened up new avenues for diet. This particular species has led directly into the four sub-species of moose found in North America today. 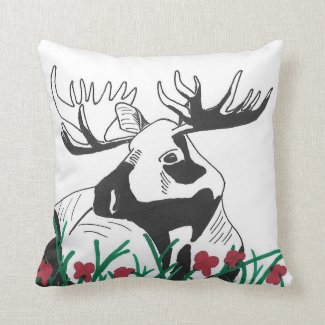 I hope you found this information interesting. Have something you want to tell us, or do you have a suggestion for a future blog topic? Leave a comment below! Thank you for reading and, until next time, goodbye!

This post contains affiliate links meaning we earn a referral for your purchase.  Thank you for your support.