Today on Light Future Art, we’re going to share some fun and little-known facts about seals! Be sure to check out our blog post about all kinds of marine mammals after you’re done reading this one!

1. Given that seals spend a good deal of their lives holding their breath underwater, they have a high concentration of carbon monoxide in their bloodstreams. The only way to expel carbon monoxide is to exhale above water, so the CO doesn’t leave their bodies as frequently as in terrestrial animals.
2. Seals also can sleep underwater. They can hold their breath for up to two hours and so often nap underwater rather than on beaches. Sometimes seals don’t come to shore at all for several months at a time.
3. It is still unknown how seals are related to terrestrial carnivores and when their shared ancestors diverged. It is known, however, that bears, skunks, weasels, and other animals in these families are the closest living relatives to seals.

4. However, scientists do have one guess as to who their ancestors may have been: insectivores. That’s right, many researchers believe that seals are descendants of terrestrials whose diets consisted of bugs because many seals have a diet comprised primarily of shellfish.
5. Young seal pups can grow quickly because their mother’s milk is so nourishing. Some seals have milk which is about 50% fat and the baby seals can grow close to five pounds in a single day!
6. Sound travels faster in water than it does in air, due to the atoms in liquids being closer together and therefore more quick to collide and transfer soundwaves. This is very evident with seals, who can hear underwater more clearly and precisely than above water. They can also hear higher frequencies of sound underwater than are audible to them in the air.

7. The Baikal seal, named for Lake Baikal in Siberia, is the only freshwater seal. Though they do live in the ocean, as well, Biakal seals first live in freshwater lakes as a transition between living on land and in the sea.
8. The heaviest seal is the southern elephant seal. While most seals weigh in close to 100 or 200 pounds, the adult male southern elephant seal typically reaches weights of several thousand pounds and is about 15 feet long. Likewise, the smallest seal is the Galapagos Fur Seal. Fully grown, these seals usually weigh about 100 pounds but are only three feet long from nose to tail.

Check out our collection of seal artwork on a variety of products in my Zazzle store.  The below link contains an affiliate link for which we might earn a referral but costs you nothing additional. 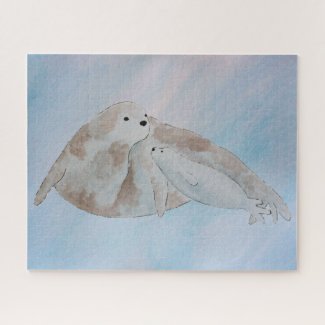