Today at Light Future Art, we’re going to take a closer look at an animal which we’ve mentioned some facts about in passing before but never dedicated an entire post to: the prairie dog. Here are some fun facts that you may never have heard before!

1. These adorable little animals have been called prairie dogs since the 18th century. They were described by the Lewis and Clark expedition. They get their name from the barking sounds they make to communicate.
2. Prairie dogs are dichromatic. This means that their eyes are capable of seeing only two types of color. The cones in their eyes prevent them from seeing other parts of the visible light spectrum. Despite this, they have very keen eyesight and can spot predators from far away. They have different calls to warn the rest of their group depending on what type of danger they are facing.

3. Female prairie dogs stay with their group for life, while males move as they get older.
4. Prairie dog burrows are typically dug around 6 to 10 feet below the surface, but they also have shallower tunnels in which they hide if they need to leave the surface quickly. As they live where it rains, prairie dogs dig air chambers in their tunnels to divert water and prevent flooding. They also dig nursery chambers for their young. It is thought that the nurseries are home to offspring from many families and the babies are somewhat communally raised.

5. Prairie dog communities, called towns, can be as large as several acres. Every town is made up of around 15 to 25 different families of prairie dogs, though in some towns there are more. Families can sometimes be grouped into clans or wards, and the clans live close to one another.
6. The borders of prairie dog towns line up with physical barriers, such as trees and rocks. They are very territorial animals. It has been observed that a guard on the edges of the town may get into as many as 20 hostile interactions with prairie dogs from other towns getting too close in one day. 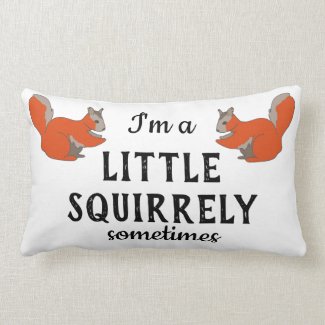 One of our adorable squirrel pillows available in our store.
by Wilderness_Store