Pakicetus may not look like a whale when you look at a picture of one. They have legs, for one thing, and are much smaller than any whale which swims our oceans today (Pakicetus was about the size of a wolf). Lots of paleoartists depict Pakicetus with long hair, although in reality, their hair may have been sparse, considering their close relation to hippos. And they had a full range of teeth, including molars and canines. But despite all of this, Pakicetus is the ancestor of every whale who lives today and is considered by scientists to be the base whale, the whale who is at the foundation of the whale family tree.

Pakicetus lived in Pakistan about 50 million years ago. The first specimen, found in Northern Pakistan in 1983, was a skull. From the teeth, it was learned that Pakicetus was likely an omnivore. Their canines and incisors were well-equipped to eat meat but wear on the molars indicated that they ground their teeth a lot while eating, which could indicate that they also ate a lot of plants. This first fossil was one of many to be found near ancient rivers and lakes. While some believe that the prehistoric whale could have been a totally terrestrial animal, there is more than enough evidence to assume that they lived semi-aquatically, like a hippo or alligator. For one thing, their eyes are located near the top of their head, which is common in animals who submerge themselves and watch what happens above the surface. Their nose at the end of their snout would have also been above water if Pakicetus had watched like an alligator. Further, their bones were heavier than one would expect those of a terrestrial animal to be. However, heavier bones are common with other semi-aquatic animals as it provides ballast, stopping them from floating to the surface and allowing the animal greater maneuverability while swimming. Finally, the ears of Pakicetus are an intermediate between the ear of terrestrial mammals, which can’t hear underwater well, and the ears of aquatic mammals, in which sound travels to the eardrum differently, meaning they can hear clearly underwater. Pakicetus is the only example of a sort of in between stage of the two auditory systems.

After Pakicetus, whales evolved to have wider feet. Pakicetus’ feet resembled hooves or the feet of hippos (not surprising, as they are closely related), but Pakicetus’ descendants developed broader feet, which eventually became flippers. Their tails also became longer (today’s whales are mostly tail) and quickly became fully aquatic. A longer tail also led to it being the main source of underwater movement, and the vertebrae structure evolved to more easily undulate the tail in the fashion we see whales move in today. The nose moved from the tip of the snout further back and further back still, until becoming a blowhole, situated on the whale’s skull above the eyes. 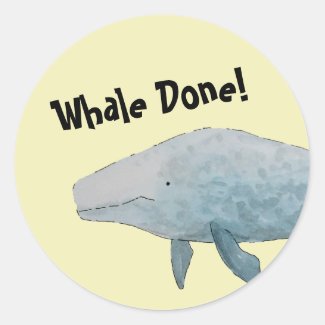 If you’re interested in whales or if they’re one of your favorite animals, head on over to Wave World Gifts, where we have plenty of products for you or gifts for someone you know featuring a whale painted in watercolors.

Thank you for reading. If you have a question or request, please leave it in a comment down below. We publish a new blog every Tuesday and Friday so, until next time, goodbye!