Have you ever heard of leafcutter ants?  Leafcutter ants form societies which are just as complex as human societies. There is a very small chance that a colony can successfuly be founded, though. All colonies are founded by a queen, who flies from her nest and mates with many male ants, and loses her wings once she is back on the ground. Once on the ground, there is only a 2% chance that she will be able to found a colony in the place she landed. Leafcutter ant colonies’ purpose is a fungus that they feed and care for, and the start of this fungus is carried in a cavity near the queen’s mouth.

The society of a leafcutter ant colony is divided into four castes, or levels in a heirarchy. These castes are mostly determined by size. The difference between the sizes of each caste varies from species to species.  Three of these ant castes can be seen in the photo on the left.  As you can see, there can be a large difference between the various castes.

Minims – The minims are the smallest caste. Their heads may be as small as 1 millimeter long, or 0.03 inches. The minims are responsible for taking care of both the young larvae and the fungus garden.

Minors – The minors are larger than the minims and serve as a patrol around the nest and protecting the foragers.

Mediae or workers – The mediae are the foragers, and do most of the generalized work. Mediae are similar to the drones in a bee colony.  The worker bees as they are sometimes called.

Majors or Soldiers – Majors are the largest of the castes, and protect the terrain around the colony, as well as face off against anyone threatening the foragers. They also move obstacles out of the way of the foragers. They are be nearing 10 times the size of minims, in the most extreme cases.  These are the soldiers of the colony and protect the other ants as they go about their tasks.

If you thought that humans were the only animals who developed farming, you’d be wrong. Leafcutter ants have cultivated a particular strain of fungus which creates food specifically for them. Their relationship is mutual, meaning that the ants rely on the fungus to survive and the fungus relies on the ants to survive. The leaves which they cut are actually to feed the fungus, although adult ants do drink sap from them, too.

The ants carry on their bodies a bacterium that serves as an anti-microbial chemical against moulds which might tend to grow on the fungus. The ants also are so attuned and responsive to the fungus that they detect chemical signals from it that indicate that a particular type of leaf is harmful or even poisonous to the fungus, and so stop feeding that type of leaf to it.

Some species of leafcutter ants have totally domesticated their fungus, meaning that it can no longer be found in the wild anywhere aside from in their gardens. This is because of the fact that the fungus no longer produce spores.  The ants are the only reason this particular fungus is still alive. 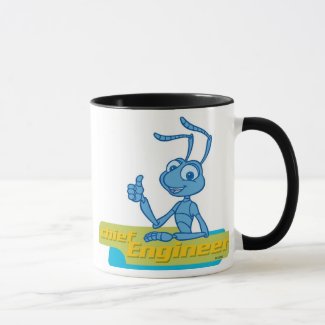 A Bug’s Life Flik “Chief Engineer” Disney MugThe specialized nature of ant colonies is not specific to only leafcutter ants.  If you have ever had an ant farm, you have seen how complex their societies can be and how extensive their homes are underground.  There have been plenty of animated movies that through entertainment give us a peek at life inside an ant colony.  “Antz” and “A Bug’s Life” are good examples of movies that show the complex and cooperative nature of a colony.

If are interesting in leafcutter ants or you know someone who will find them interesting, you may be interested in creating a personalized message carried by a leafcutter ant on Fiverr for only $5. There are also 10 other designs for you to choose from.

Thank you for reading! We publish a new blog every Tuesday and Friday so, until next time, goodbye!