If you’ll remember, last week there was something of a surprise when I was researching otter evolution. I thought that it might be interesting to see if I could find any similar surprises if I typed in “prehistoric” and then an animal that we know today. I tried one or two entries until I hit on gold. “Prehistoric penguins” brings up result after result. The New York Times has an article titled “Ancient Penguins Were Giant Waddling Predators”. How big were they? “Prehistoric Penguins Were Human-Sized” says Roaring Earth. If you thought that I was already sold on writing about prehistoric penguins based on these headlines, you’d be right, but what really sealed the deal is this final title I found from the New York Post: “Giant, muscle-bound penguin ruled prehistoric bird world”. I think I can say with confidence that this is the one and only time myself or any of you reading will see the phrase “muscle-bound penguin”.

So who were these big penguins? These adorable flightless birds probably lived at the same time as dinosaurs, some 61 million years ago. They were roughly 5.5 feet tall. Some anatomy is similar to those of flying birds, except instead of their air sacs keeping them in the air, they keep the penguins buoyant in the water. Some fossils reveal that there may be certain penguin ancestors who did fly, but these human-sized ones probably didn’t.

These big penguins were discovered when several leg bones were unearthed in New Zealand by Leigh Love. These finds were from 61 million years ago, the oldest known penguins to date coming from around that time. Scientists think that these birds reached their peak size early on in their evolution, and have usually just decreased in size as time has gone on. The largest penguins probably were driven to extinction or forced to evolve due to the emergence of marine mammals, such as seals, outcompeting them.

Something is different about these fossils from other penguin ancestors from the time: they probably stood and waddled around in the manner that we think of penguins today. Other penguin ancestors stood in a more stooped position. This discovery by Love has also opened debate again amongst scientists about whether or not penguins have been around a lot longer than we currently think. These penguins also would have probably lived in warmer seas.

And why does the penguin need to be “muscle-bound”? Well, for an animal as large as a human but able to survive deep dives for fish like a penguin does, that animal’s body has to be incredibly strong and tough. The New York Post published a quote from Alan Tennyson, a vertebrate curator at a museum in New Zealand, the penguin “would have been considerably more powerful than a person”.

I have also been searching for prehistoric animals that were much smaller than their modern-day descendants, but so far I’ve been unsuccessful. I have a few theories about why that may be, but wait until next week where I will either find one to talk about or explain why there seems to be none. 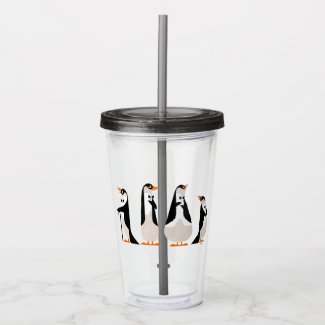 Do you have any thoughts about this, or about the giant penguins? Please leave them in the comments below. Thank you so much for reading and, until next time, goodbye!