Last week, we discussed the subject of one of our latest designs: the sandpiper. If you follow us on Twitter or Pinterest, you might have also seen some new products featuring hedgehogs. Therefore today, we’re going to share some fun and little known facts about the humble hedgehog. 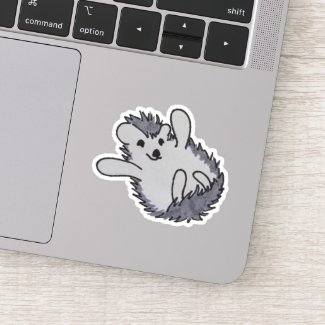 1. These cute little animals can be found naturally in Africa, Asia, and Europe, and have been introduced to New Zealand artificially. Unfortunately, there are no native hedgehog species in either North or South America. There are also none in Australia.
2. Hedgehogs have spines. They are not like the quills of a porcupine because they do not detach from the hedgehog’s body. Spines are made of hardened hair and shed as they age. Each hedgehog has around 6,000 spines on their back at any time.
3. Hedgehogs are rather small, mostly being able to fit in the palm of your hand. Most hedgehogs do not weigh over four pounds. Some of the smallest hedgehogs weigh in at under a half a pound.

4. The eyesight on hedgehogs is very poor, so they rely primarily on their keen hearing and smell to find food. Hedgehogs are nocturnal but do not have significantly better ability to see in the dark than in the sunlight.
5. Hedgehogs are primarily insectivores and eat a wide variety of insects and bugs, which is why gardeners love to have them around. If the insects become scarce, they also can eat small reptiles or eggs. In fact, setting out some cooked egg for hedgehogs will be sure to attract them to your porch, if any happen to live nearby. Most species are also capable of fighting vipers and eating them, as they are immune to the venom.

6. Hedgehogs are solitary animals and really only congregate in order to mate. On the rare occasions that hedgehogs do form groups, those groups are called arrays.
7. Groundhog day is an American tradition started by German immigrants. The only reason that the weather is predicted by a groundhog is because in America there were no native hedgehogs. Back in Germany, the superstition was about a hedgehog. The hedgehog wouldn’t look to see his shadow but would simply return to his burrow immediately if more bad weather was on the way.

Personalize your technology at no additional cost on Zazzle.  Add your name, a photo, or anything else your imagination creates.  The below banner contains an affiliate link for which we earn a referral.  Thank you for your support.

Hope you enjoyed and thank you for taking the time to read. If you have any questions or requests for future topics, you can also put those in a comment below. We publish a new blog every Tuesday and Friday so, until next time, goodbye!