We are starting this week talking about moose.  Moose are the largest of all the deer species, standing much taller than a 6-foot man. In fact, they are one of the largest mammal species in North America. Their antlers are impressive, spanning 6 feet in length. Every year, male moose lose their antlers and regrow them the following year, this time bigger than the last. Female moose do not grow antlers and are slightly smaller than the males.

Moose live all throughout Northern North America, abundantly in Canada and Washington, and even down into Colorado. Moose need cool climates because they produce a lot of body heat and cannot sweat.   During especially hot months, they have to keep to the shade or in water. They live in forests where there are enough rivers and streams to support them. This is because in the warm months, their diet is largely made up of water plants, such as water lilies, horsetails, and pond weeds. During the colder months, moose dine on roots, bark, and conifers. Moose are also good swimmers, despite what you might think based on their large body and somewhat gangley appearance.

Moose tend to be solitary creatures, aside from a mother and her child. Only sometimes can two unrelated moose be seen eating near one another. During the mating season, though, they need to meet one another. At this time, the bull moose (the male) makes a loud bellow to attract potential mates. If two males want the same female, they fight one another with their large antlers and the winner gets the female. The females give birth to one or two calves in the spring. They stay with the mother for up to a year, until the next offspring is born. The mother and child form a very close bond during this time.

Moose typically live 12 years in the wild. They suffer from dental wear and diseases such as “Moose disease”, and bulls also suffer from injuries from fighting with other bulls. The oldest known bull moose in the wild was 15 years old, and the oldest cow (female) was 22 years. Because of their large size, adult moose are not often preyed upon. Calves and the sick and elderly are, though. Moose are well adapted to protect themselves with their antlers and hooves, but their few predators include bears, wolves, and, of course, humans.

The biggest threats to moose are deforestation and hunting. Moose are also often the victims of car accidents. In good news, though, the global population of moose is actually increasing with every effort to conserve their habitats and they are listed as Least Concern. 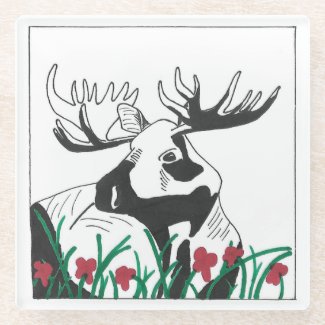 Thank you for taking the time to read. I hope you found this information interesting. If you have anything to add to our discussion, please leave a comment below. A new blog post is up every Tuesday and Friday, so look out for the next one later this week. Until then, goodbye!

This post contains affiliate links meaning that we earn a percentage of each sale.  Thank you for your support.