A few weeks ago, we shared some fun facts about tropical fish. This week we’re going to be exploring coral reefs, which are home to many of the fish in our tropical fish blog post.

1. Each individual coral is called a polyp. What we see as coral, whether dried on the beach or living, are actually hundreds of tiny polyps holding on to each other.
2. Coral is actually an animal, not a plant. The closest relatives to coral are anemones and jellyfish.

3. Coral reefs can grow around the hulls of old ships. In order to promote coral reef growth, old ships will sometimes be purposefully sunk in order to encourage reef growth.
4. Scientists have discovered that the algae and other organisms which grow on coral reefs can be used to create a protein to attack cancer cells.
5. Coral reefs grow in shallow tropical waters because they depend on sunlight. Coral won’t grow at depths exceeding 45 feet and tropical waters are clearer and calmer than oceans in other parts of the world. They also require a constant temperature of about 80 degrees Fahrenheit. However, some coral reefs depend on stronger ocean currents to bring in new food to feed the many animals who live in the reef.

6. Absorbing carbon dioxide from the air makes ocean water too acidic for coral to grow, meaning that climate change prevents reefs from forming or expanding. The acidic water also weakens coral reefs that already exist, meaning they are in danger of breaking apart.
7. Coral reefs are the most diverse ecosystems in the world. In particularly densely populated areas, there are more types of fish in less than a square mile of coral reef than there are species of birds in North America.

8. The Great Barrier Reef in Australia is about 10,000 years old. It covers more than 2,500 square miles.
9. It is most common for coral reefs to grow on the East side of landmasses, and much more rarely on the Westside.
10. Coral has existed in the form we know of today for over 500 million years, making it older than dinosaurs. In fact, it is more than twice as old as the oldest dinosaurs.

Check out our clown fish products now available in our Zazzle store.  The below link contains an affiliate link for which we earn a referral but costs you nothing additional. 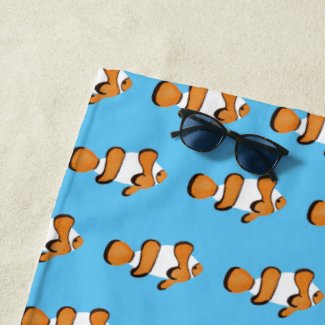