Salmon come in a variety of species that all differ in appearance, sometimes drastically. For example, the chum salmon is blue in color while the cherry salmon, true to their name, is red. Salmon live in the northern areas of North America, in fresh water and salt water.  Every species of salmon is anadromous.  A large word which means that they are all able to live in both fresh and salt water. Typically, salmon will hatch in freshwater streams and rivers and move to the oceans over their life, returning to the fresh water to reproduce. Some salmon will never leave the freshwater areas, though.

Salmon are most famous for being the Alaskan state animal and living in greater numbers in that state. The Chinook salmon, or King salmon, is their state animal, and is the largest of all the species of salmon.

Young newly-hatched salmon are very interesting creatures. They are hatched with a yolk sac twice their size and remain in the gravel where they hatched for a few weeks, feeding off of the nutrition in the yolk. At this point, they are called alevin. After a couple of weeks, they leave the gravel at the bottom of the stream to start to eat zooplankton. At this point, they are called salmon fry and use their vertical stripe markings to blend in their the stream-bed vegetation.

The next stage of salmon life is probably the point of biggest change, and is similar to human teenage years. The smolts (that’s what they’re called during this stage of life) begin to head out towards the oceans, and their protective vertical stripes turn to other patterning and coloration. During their journey, they undergo a change called smoltification. Smoltification is their bodies adjusting to living is salt water. For a little while, they will live in schools in the ocean, but once they get a little older, they head out on their own.

When the salmon are between 2 and 6 years old (it depends on the species), they will feel the urge to spawn, and that means that it’s time for them to go home to fresh water. The salmon then swim hundreds of miles back to the place that they hatched. Scientists don’t know how they do it, but they suspect that on their journey out to sea, they remember scent markers that they follow in reverse. During this swim, they do not eat and undergo another physical appearance.  There is a change in coloring as well as the males growing a hump and a hooked mouth.

The spawning is an exhausting task. Already fatigued from the swim and from lack of food, the female salmon will dig out a small depression in the gravel bed with her tail and lay her eggs in it. A male will then come along to fertilize them. The male will go on to spawn with others, but the female will stay near to the nest for a time. She will have covered it with rocks to protect it from predators. Shortly after spawning, though, the salmon usually die. 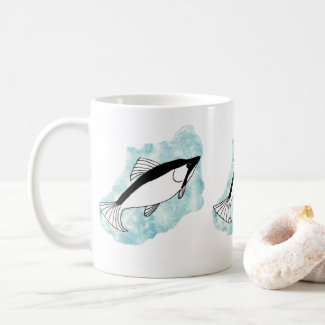 Salmon are in great danger from humans. For one thing, they are a very popular food source. Pacific Salmon are a critically endangered species. On one website I visited to find information for this blog post, it was mentioned that they are preferred by both fishers and consumers. Another factor are the dams and other modifications to waterways which pose huge obstacles to salmon attempting to adjust from fresh water to salt water. In some cases, if their journey to the ocean is delayed for long enough, the process will begin to reverse. This could doom them. It also leaves them more open to predators in the area. Pollution also threatens salmon, where ever they are, as well as watercraft in the areas they live, which disturb the water and may kill them. Even though they might not be one of the first animal groups you think of that need our attention, they certainly shouldn’t be forgotten.

I hope you liked this blog post and learned something from it. If you have something to add to our discussion, please feel free to leave a comment below. As always, if there is a topic you wish for us to explore, leave a comment.  Thanks for reading and, until next time, goodbye!

This post contains affiliate links.  We appreciate your support.