Today at Light Future Art, we’re going to share with you some fun facts about octopuses. From the big to the small, I bet we have something for you today that you’ve never read before!

1. There are over 250 species of octopus in the world. They live at different depths in the ocean, as well, with some remaining near the surface and some living near the seabed.
2. While most octopuses live in marine environments, you might just find a freshwater octopus living in the rivers of North America.
3. The largest octopus is the Pacific octopus. They can usually grow to over 15 feet long and typically weigh over 100 pounds. Conversely, the smallest octopus is the star-sucker pygmy octopus. They are less than an inch long and weigh less than a gram.
4. The common octopus has about 240 suckers on each limb and each sucker can hold dozens of pounds of weight. 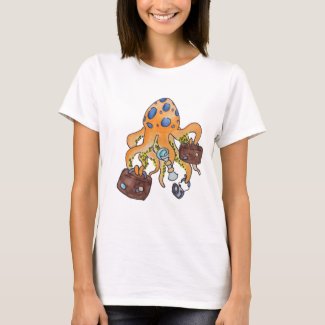 8. Octopuses have decentralized brains, meaning that their neurons are distributed throughout their body. Most of their neurons are in their arms, which is why, even after losing an arm, that arm will continue to react to stimuli for a while.
9. Like chameleons, octopuses can change the color of their skin to hide. A full transformation takes less than a second to complete. Octopuses typically change their pattern to mimic rocks or other objects on the ocean floor.
10. Squirting ink at their predators is the octopus’ best defense. Not only does the ink cloud the vision of the predator, but it also dampens their other senses, making it difficult to follow the octopus. Octopuses who live in abyssal levels or deep on the ocean floor cannot produce ink, however.