Beluga whales are one of the smallest species of whales, with their nose to tail length being usually between 15 to 20 feet, which isn’t small by human standards but pales in comparison to the blue whale, whose average length is around 80 feet. Beluga whales tend to weigh anywhere from one ton to 1.5 tons. In the wild, they live at least 35 years, and some whales can live to be 50 years old.

These whales live in groups called pods. Most pods live in the Arctic Ocean, in shallow water or wide Arctic rivers, but they will travel further South if the sea begins to freeze over too much. Getting trapped in the ice is a real danger for beluga whales, as it would cut them off from food and expose them to predators such as polar bears. They are incredibly social animals and communicate with each other through click, whistles, and clangs, among lots of other vocalizations. Baby beluga whales, called calves, have access to almost the full range of beluga vocalizations within weeks of birth.

Calves are not born white, as the species tends to be known for, but rather start out gray or brown and grow paler and paler with age. These whales are sometimes also referred to as “white whales” because of their striking color. The large domed foreheads which these animals possess are also one of their most recognizable features. Unlike some other whales, belugas do not have any dorsal fin.

While belugas are part of the greater whale family, they have only one close living relative: the narwhal. Narwhals and beluga whales are about the same size and live in the same regions, although narwhals prefer deeper waters. There seems to be no hostility between the two species, however, as groups of each have been seen swimming alongside one another. Both belugas and narwhals possess the unique ability among whales to turn their heads. This is because their vertebrae are not fused as are those of other whales. While both diets consist of the same types of fish, belugas have a full mouth of teeth and narwhals have only two teeth on their upper jaw. One of these teeth is the tusk for while narwhals are famous. Only males have a tusk, though, and young narwhals are sometimes confused for belugas.

Check out this beluga whale puzzle in our Zazzle store.  The below link contains an affiliate link for which we earn a referral.  Thank you for your support. 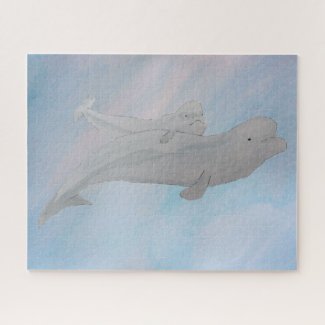